Don’t Suck it Up and Deal With It!

This is a short piece on desensitizing vs saturating (flooding) to help a dog (or child) get over fears.  It was printed over a year ago in Northern Virginia Today.

At the time I am posting this, my daughter is almost 11 (she was 14 in 2018 as I am returning to edit this).  Careful work over time helped her overcome various fears instead of the old school “Suck it up and deal with it!” mentality many have. 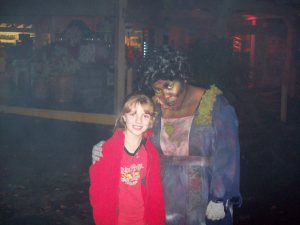 I was watching the interactions of a child of about seven and his parents at a theme park’s Halloween season.  The boy was past terrified and an emotional wreck.  He was a ball of quivering snot as they hauled him through scare zones and haunted houses.  His parents felt he had to deal with it.  They were having fun so they made the poor child endure what was nothing but torture for him.  Even with actors toning it down when they saw how scared he was, it was no help.  The boy was being flooded with scary things.    I saw him several times that night.  Eventually he shut down, gave up: eyes dead, following his parents like a little robot.  I was saddened by what I saw this child’s parents putting him through.  What would happen next time they brought him here?  Would he shut down?  Would he panic?  How much emotional trauma was being done for the sake of what the parents wanted to do?

Now, a certain little girl had grown up following her big brother (5 1/2 years older) around the same theme park. She took her first steps there, trying to chase him as he went to a roller coaster.  Eventually, big brother began wanting to stay later during the haunting season and test the scary Halloween stuff to see if he was ready to explore more.  Over the years, Dad would take the boy exploring the various haunt zones while Mom and little one stayed to the sides and watched.  Actors would come out of their scare zones and gently interact one on one with her.  She squealed with glee as they “hunted down” other patrons of the park.  If she seemed apprehensive, Mom would move her away and let the child observe.

Eventually, little sister REALLY wanted to keep up – but was not ready at age three (add: I went back and found old pictures and dates, she was a year younger that I originally posted) for the really scary things.  So Daddy would go off with big brother and Mommy started to work to help the girl learn to have fun instead of being terrified.  They began entering the scare zones, a little at a time. Mommy would ask characters to come and interact with the little one.  One actress took the child under her wing.  Every weekend for the entire season (sometimes twice in a weekend the family would go), this ghoul provided an emotional safe zone the child could go to if needed.  If she was not there, another creepy would take her place.  With parental permission,  the actress would take the child into the mists and interact with other ghouls.  The following year, the child said she was ready to enter the scary indoor areas – with the help of the ghoul who was still there and who would be there for a total of four seasons.  If something became too scary, the child would get out and seek out her safety-ghoul.

The child developed a strong affinity for the vampire haunt.  Every weekend while big brother and Daddy did the whole park, the little girl and Mommy would do the vampire haunt over and over.  Sometimes a dozen times in one night. The vampire crew and security staff began to recognize her and worked hard to make it fun while others were being scared.  They would give her vampire escorts without Mommy.  They would run her through their passages to get from one area to another to help them scare patrons.  Once a crew coming back from break saw her coming out of the haunt, they scooped her up and brought her back in.  Online she was their unofficial mascot.  She grew to enjoy the fun of the Halloween events at the theme park.  Yes it took time but by age five this child was becoming an old pro.  As she grew in confidence and courage, she began doing other haunts.  But every time she entered the vampire place, her favorite security guards would radio in “Minion has arrived.”  Throughout the haunt you would hear cries of “Where’s Minion?  We need Minion!”  If something scared her, she had her safety ghoul and the vamps to seek out. Her parents were very aware of her stress levels and worked to keep them low – just as they did with her big brother.

Now at age ten, my daughter – the little girl in this piece – will help other scared children out.  She will offer to go through the vampire zone with them and their parents in order to make it fun.  She will have the vamps tone it down and make things easier for the little ones.

Now, how does this apply to pets?  Saturation (Flooding) vs. Desensitization and Counter Conditioning are methods often recommended to help pets overcome fears.

Saturation is exposing to a high level of stimulus and hoping the animal gets over it.  This is risky.  We run a risk of the animal shutting down and later exploding when faced with a stressing situation.  Rehabilitating dogs trained to get over fears with saturation methods is difficult because they are  under higher levels of stress.  Saturation is not a healthy way to help any animal – even humans – overcome fears.  The first child was saturated.  He was being flooded with things that terrified him and his agony was ignored.  Several times his parents told him to deal with it. Think about the things you are most afraid of and being shoved into it with no escape.  What would this do to you?

Desensitizing and Counter Conditioning is exposing the target of our work to SMALL doses of the stressor and then working to change the emotional response.  It is a healthier approach. Progress is made only when the focus of the work shows she is ready.  If fears arise again, the work is backed up and started over, slower this time. Yes it takes time, but if you stick to a good program, it is all worth it in the end.

Karen Peak is owner/operator of West Wind Dog Training in Prince William County, founder of The Safe Kids/Safe Dogs Project, a published author, wife, mother and the manager of a multi-dog, multi-species household.

2 Responses to Don’t Suck it Up and Deal With It!