Dog Safety – the other end of the spectrum

Generally I wait until a piece has been published in the paper before sharing on my blog – in this case I blogged the same day I submitted. I have since added a bit to this since publishing in this blog.

In 2000, I developed The Safe Kids/Safe Dogs Project with a focus on reducing dog-related injuries to children through education.  Over the years, I added adaptations for adults, different professions that may encounter dogs, dog owners, etc.   After Thanksgiving, I realized I had to address the other end of life and interaction with dogs.

I have owned four dogs that passed different therapy dog screenings.    I have worked with both Alzheimer’s and Dementia patients and did some time doing pet therapy at a rehab hospital for children with serious disabilities. I am the parent of an autistic child and some of my clients have had children on the spectrum. Dogs can be wonderful, calming, soothing, comforting.  I have seen residents and children open up, show emotion, talk, and engage with the dog when they shut out most others.  I have seen so many wonderful things happen with seniors and dogs.  However, we have to remember things may not go this way. 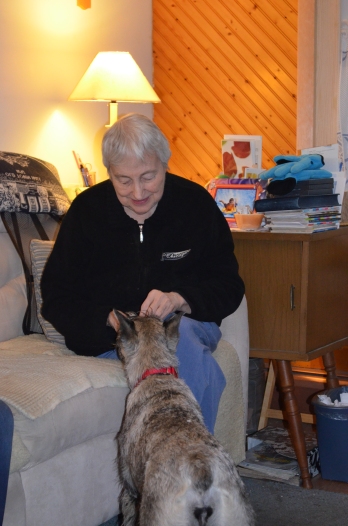 Over Thanksgiving in 2015, I watched my Mother in Law interact with our young adolescent dog.  Luckily we have done extensive socializing with the pup so she was used to a lot of things.  The dog was sitting with my children when MIL walked up.  MIL was acting in a way that many dogs will find uncomfortable.  She was flitting her hands at the dog, clapping, making noises, not respecting the dog’s personal space.

It was clear the pup was apprehensive.   Dogs that are stressed are less tolerant of things.  Holiday travel is stressing.  Add in people whose behaviors are altered due to a variety of causes and there is a chance for trouble.  Therefore it is crucial that people around the canines and humans remain alert and do not hesitate to intervene.

We needed to give the pup a chance to figure things out and get some positive associations with MIL.  MIL wanted to be friendly to the dog.  It was like watching a child who is excited about seeing a dog but who is unable to maintain good behaviors.  How we as owners respond and work with the situation can make or break things.

We did not punish shows of concern from the pup; it would only serve to give a negative association with MIL.  We used food and reassurance to help relax the pup and give her positive associations with MIL.  We also moved her away when needed.  Not matter how much MIL loved animals, we still had an obligation to the emotional needs of the dog. The more an animal is forced to endure stressing things, the greater the chance of something happening.   It is important to manage human behaviors.

We would have to stop and redirect MIL at times.  People with cognitive impairments may not realize what they are doing.   It was also important for the pup to get breaks before the pup became too stressed.  Even with a good, New England snow storm kicking up, the kids would bundle up and take the pup for a walk in the neighborhood.

When we are working with people with cognitive impairments of any age, we need to be sensitive.  There is a balance between understanding the behaviors of the human and the needs of the dog.  It is important to understand, identify, and properly respond to stress signals in the dogs.  It is crucial we intervene and respond before something happens. Even high tolerance dogs can be pushed to react.

I love seeing videos and pictures of seniors responding to animals.  I fondly remember the work I did as a young woman with dogs and nursing care facility residents. I hope that this pup will become a therapy dog.  But I am also a realist.  Not all dogs (or cats) are able to handle the environments we want them to enter.  It is important that we know how to identify stress signals in our pets and respond accordingly.  Punishing stress signs does nothing to help the situation.  Even if a person had cognitive impairments, allowing behaviors that are concerning to the critter will do nothing to help the situation. Be smart, be responsible and make these visits enjoyable and safer for all.

2018 – Uhura never became a therapy dog.  Not that I do not think she could do it but I am not sure it would be in her best interests to be a therapy dog.  She enjoys being around people but is a very much on her terms dogs.  She will not tolerate people walking into her face.  This behavior from people will elicit a solid warning bark from Uhura.  Uhura will happily greet and seek out people who are being respectful.  She will avoid people who she perceives as not.  She is not as tolerant of things she would need to be as a therapy dog in my opinion to make a great one.  But that is OK.